All main benchmarks closed lower Tuesday in abbreviated trading ahead of the July 4th holiday as investors dumped technology shares. The weakness in the tech sector follows on the heels of news that a Chinese court blocked the sale of Micron Technology Inc. MU, -0.72% chips in the country, prompting the stock to sink 5.5%. The move is related to a probe by Chinese regulators into high price of memory products. The Dow Jones Industrial Average DJIA, -0.54% fell 112 points, or 0.5%, to close at 24,194. The S&P 500 SPX, -0.49% dropped 12 points, or 0.5%, to end at 2,714 while the Nasdaq Composite Index COMP, -0.86% shed 65 points, or 0.9%, to close at 7,502. The market is closed Wednesday for Independence Day holiday.

How will investors know if there’s a full-blown trade war? Here’s what Wall Street says

Since the start of 2018, Wall Street has been harried by the threat of the imposition of tariffs on products from some of the U.S.’s longstanding trade partners, with a recent escalation of tensions raising the question: Are we in a full-blown trade war? And, if not, when will investors know?

We’ll know it’s at a trade war when…

—“A trade war has been defined as ‘an economic conflict in which countries impose import restrictions on each other in order to harm each other’s trade.’ And so one could argue we are already in the midst of a trade war with multiple countries, although at this juncture it is relatively minor,” said Kristina Hooper, chief global market strategist at Invesco.

“The key question is not so much when are we in a trade war — because we already are — but when the trade war will affect the economy. I think we could start seeing a material impact by 2019, although so much depends on where the trade situation goes from here,” Hooper said.

—“A trade war will be when escalating tensions lead to across-the-board tariffs across multiple countries,” said Chris Zaccarelli, CIO at Independent Advisor Alliance

“Hopefully cooler heads will prevail and everyone will come back to the negotiating table and overall tariffs will be lowered worldwide, but in the meantime markets will have to adjust to this uncomfortable period of threats and counter-threats,” he said.

—“Investors will start to feel the effects of the escalating trade conflict as the tariffs themselves move from proposed to implemented status. To date, only a very small amount of tariffs are fully implemented; therefore, the full effects both on the economies of the countries involved and the equity values of the affected companies are not yet felt on a broad scale,” said Jamie Cox, managing partner at Harris Financial Group.

—“Judging by that metric, markets around the world are saying the war might already have started, but here in the U.S. the reaction looks more like a Cold War than a hot one,” said Brad McMillan, CIO at Commonwealth Financial Network.

As rhetoric on global trade ratchets higher, here’s a look at what new tariffs have been imposed and what has been threatened this year. 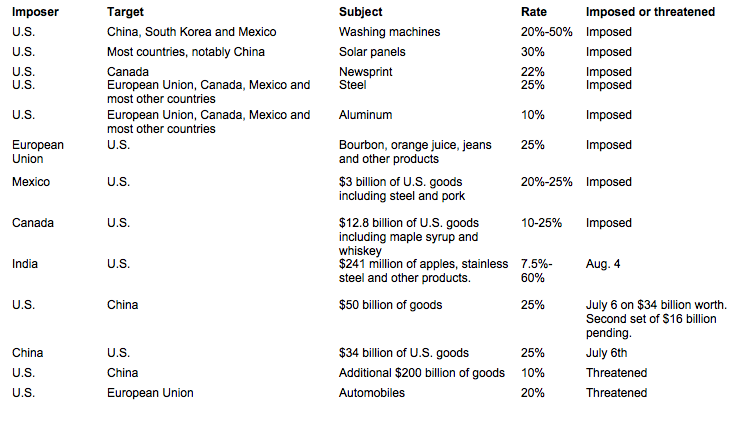 Thursday: Release of minutes from June 12–13 meeting of the U.S. Federal Reserve Board

Midyear checkup: The S&P 500 and the Dow posted mixed results in the first half of 2018, while the NASDAQ was a standout performer. On a price basis, the S&P 500 was up nearly 2% through Friday and the Dow was down nearly 2%. In contrast, the NASDAQ posted a year-to-date gain of nearly 9%

Bitcoin below $6K: The price of bitcoin fell for the fourth week in a row, slipping below $6,000. The cryptocurrency is down nearly 70% from its record high of more than $19,000, reached last December.

Tech power: The NASDAQ owes much of its year-to-date outperformance and recent record highs to its heavier weighting in information technology stocks relative to the S&P 500 and the Dow. Tech and consumer discretionary are the only two sectors in the S&P 500 that have posted double-digit total returns so far in 2018.