Wall Street is bracing for what seems almost assuredly to be a third interest rate cut in as many meetings of the Federal Reserve on Wednesday afternoon.

And although there may be some trepidation about policy makers delivering another dose of monetary easing to a stock market that is at or near records, history shows that the market tends to extend its gains after three successive interest-rate cuts of a quarter percentage point, according to data from LPL Financial (see chart below). 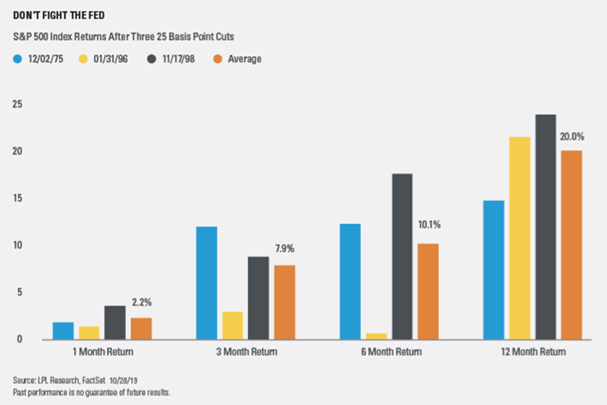 How good have returns been in those periods in which the Fed has delivered a trio of interest rate cuts of 25 basis points ? They have been spectacular in the 6-and-12 month period following those decisions by the rate-setting Federal Open Market Committee.

“We’ve seen periods of economic slowdowns that had three consecutive 25 basis point cuts, most recently in the mid- and late 1990s,” said LPL’s senior market strategist Ryan Detrick. “The good news is the economy accelerated after the slowdowns and stocks did quite as well.” he said.

U.S. stocks ended lower Tuesday, a day after the S&P 500 index scored a record close, as investors kept their attention on a stream of corporate earnings and awaited the outcome of a Federal Reserve meeting that’s expected to deliver another interest rate cut on Wednesday.

What did the major benchmarks do?

What drove the market?

Investors parsed another round of corporate earnings reports Tuesday with the health sector and finance sector providing some support, but technology shares weighed on the indexes.

Fed ahead: The U.S. Federal Reserve is widely expected to cut interest rates for the third time in three months when it concludes a two-day meeting on Wednesday. Fed statements will be closely watched for any indications as to whether the latest reduction is likely to be the last one for this year or whether another cut could come at the Fed’s December meeting.

Flirting with records: The S&P 500’s rise over the past three weeks moved the index on Friday to a level that was just one-tenth of a percentage point below the record high that it set three months earlier. The Dow and the NASDAQ had a little further to go, as both indexes were around 1% shy of their records.