Prices have climbed around the world, with commodities prices surging and U.S. inflation hitting a 13-year high. It’s the first time since the 1970s that a supply shock is the main culprit. This is where the comparison ends. There’s no risk of 1970s-style stagflation, in our view. Economic activity is increasing briskly and has room to run. We remain tactically pro-risk, but see a narrower path for risk assets to move higher as markets and policymakers could misread the price surge. 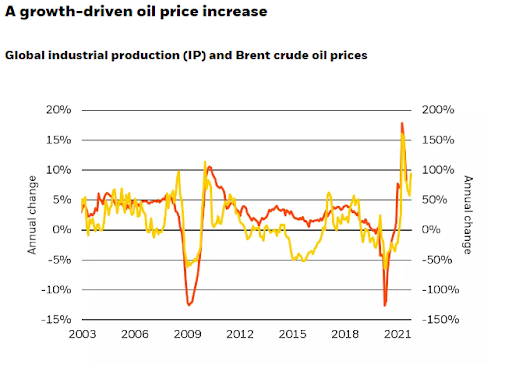 We have long held that inflation was one of the market’s most underappreciated risks. Now it’s here. This year’s surge is primarily driven by a major supply shock: the vaccine-driven restart of economic activity from the pandemic’s shutdowns.

Producers have struggled to meet resurgent demand, clogged ports have increased shipping costs, and surging commodities have added to price pressures. These dynamics mark a sea change from the environment many of today’s investors know best: decades of low inflation on the back of deepening globalization and technological advances.

The last time a major supply shock drove up inflation was in the 1970s, when an oil embargo by producers triggered a spike in oil prices. Today’s oil price surge naturally raises the question of whether the economy is headed for 1970s-style stagflation, a period of high inflation coupled with weak growth. We think not. In fact, the growth situation today is in many ways the 1970s turned on its head.

Growth is increasing at a rapid clip, rather than stagnating, as the restart rolls on. The oil price surge is to be expected in this environment, in our view. As the chart shows, oil prices (the yellow line) have moved in line with the resurgence in economic activity (red).

Why is today’s picture different?

First, the current pickup in inflation is driven by the restart, not rising energy prices. Supply capacity has been slow to come back online, resulting in bottlenecks and price pressures.
Second, growth has room to run, we believe, with global activity well below its long-run potential.

Supply will eventually rise to meet demand, instead of the 1970s experience of demand going down to meet supply.

Third, resurgent activity is increasing demand for oil and driving prices higher. Again, this is the exact opposite of the 1970s, when higher oil prices harmed economic activity.

We expect the restart pressures to persist well into 2022 before eventually subsiding as near-term supply-demand imbalances ease. There are factors beyond the restart that could add to this persistence: the consolidation in the resources industry, capital discipline by producers, years of underinvestment in production capacity, and perhaps the shift to more sustainable energy sources. The series of shocks provide a glimpse of what a disorderly transition to a more sustainable world could look like, with a risk of commodities volatility jumping to other asset classes – and a resulting increase of risk premia across the board. This underscores our 2021

The benchmark S&P 500 index (.SPX) is now just 0.7% away from a record high hit in early September, with investors hoping that a flow of better-than-expected earnings reports will push the market to new highs despite concerns about an eventual tightening of monetary policy.

Nine of the 11 major S&P 500 sector indexes were trading higher, with healthcare stocks (.SPXHC) taking the lead, while technology shares (.SPLRCT) offered the biggest boost.
Analysts now expect S&P 500 earnings to rise 32.4% from a year earlier, according to Refinitiv data.

“Investors will be paying very close attention to pricing power, how companies are dealing with labor shortages and inflationary cost pressures within their business,” said Eric Marshall, portfolio manager at Hodges Funds.

News Around The web:

On the rebound
The major U.S. stock indexes slipped on Monday and Tuesday but came back in a big way late in the week, rising around 2% overall to record their second positive week in a row. A strong start to quarterly earnings season provided a key catalyst.

Earnings surprises
As of Friday, 80% of the S&P 500 companies that had reported third-quarter results exceeded analysts’ earnings estimates, according to FactSet. That so-called beat rate ranks above the 76% five-year average. Results were in from 8% of S&P 500 companies as of Friday, with many of the early reports coming in from major banks.

Retail resilience
Despite inflation concerns and the Delta variant’s spread, U.S. shoppers continued to spend at a steady clip in September. The government reported on Friday that sales at retail stores, restaurants, and online sellers rose a seasonally adjusted 0.7% compared with the previous month. Relative to September 2020, sales jumped 13.9%