ISM Manufacturing fell to 47.8 in September, down from 49.1 the prior month, making for the weakest reading since June 2009. A reading below 50 signals contraction.

As for construction spending, the Commerce Department reported a 0.1 percent rise, below the 0.4 percent economists were forecasting. The data point suggests a slowdown in residential projects.

The major U.S. averages fell more than 1 percent across the board.

Additionally, General Motors dropped after it announced that 6,000 workers will temporarily be laid off on the closure of a pick-up truck in Silao, Mexico tied to the UAW strike, now in its third week. The plant shutdown means that GM has lost any new supplies of its light-duty Chevrolet Silverado, the company’s top-selling U.S. vehicle. Adding to the weakness, McDonald’s was among the Dow’s worst performers after JPMorgan Chase analyst John Ivankoe warned that third-quarter store sales will likely fall short. The drop in the restaurant chain also weighed on consumer stocks.

The S&P 500 dropped, led by industrials and tech shares.

October is what we thought it was!

That is to paraphrase the late Dennis Green, who more than a decade ago, famously declared of the NFL’s Chicago Bears: they “are who we thought they were. And we let them off the hook.”

Stock-market investors may be sharing that sentiment after seemingly having victory in sight on Tuesday like the Arizona Cardinals then-coached by Green back in 2006.

But there may be hope yet for Wall Street.

Early Tuesday, the Dow Jones Industrial Average DJIA, -1.28% was boasting a nearly 130-point gain, and the S&P 500 index SPX, -1.23% and the Nasdaq Composite Index COMP, -1.13% were enjoying a healthy start to a month that has been known for its turbulent streak.

However, after the weakest manufacturing report in about a decade, the investment mood was shattered. All three benchmarks finished with declines of at least 1% and the Dow and S&P 500 notched their worst daily losses since Aug. 23, according to Fact Set data.

That said, the analyst at Bespoke Investment Group say that a weak start to October doesn’t necessarily mean that all is lost for the remainder of the month and year.

There have been 14 trading days in which the S&P 500 has fallen by at least 1% in the first trading day in October. But, the S&P has gained an average of 3.75% for the rest of October when it has had such a start and has finished positive in the remaining three months after a 1% decline to start the month, boasting an average gain of 7.2% for the quarter.

“Bulls would certainly take a 1% decline today if it meant 7%+ gains through year-end compared to the average gain of 2.43% for all years,” Bespoke wrote on Tuesday (see the table below). 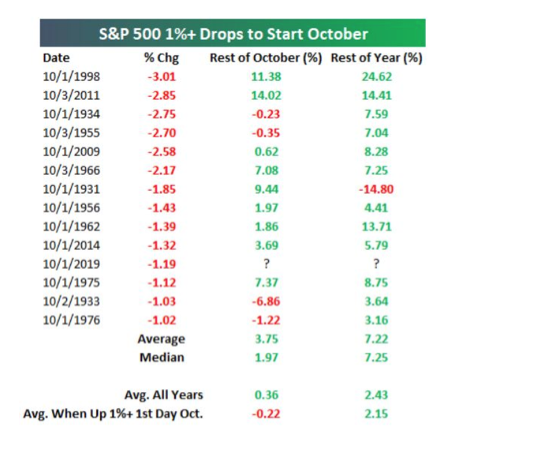 October has notoriously been a rough stretch for equity indexes, marked by the stock-market plunge that led to the 1929 Great Depression, the 1987 crash and the 2007-’08 financial crisis, prompting Stock Trader’s Almanac to refer to the month as the “jinx month” for equities.

But in this case, maybe Tuesday’s reminder that October is fraught for investors means that all the bearishness is out of Wall Street’s system.

Bespoke cautions, however, not to get too carried away with optimism that their data may imply:

“This isn’t to suggest that markets are going to be free and clear for the rest of the year, but it goes to show that bad starts to Q4 aren’t the end of the world either,” Bespoke’s analysts write.
All of this action puts the onus on Friday’s jobs report to demonstrate that the wheels aren’t entirely coming off U.S. economic expansion in its history-setting 11th year.

Even-keeled September: Although stock volatility climbed somewhat during the latest week, market movements have been modest in September relative to August’s bumpy ride. The S&P 500 on Friday recorded its 16th consecutive trading day without a move of 1% in either direction, the longest streak since July.

Trade talks: The United States and China are expected to resume high-level trade negotiations in the second week of October. U.S. Treasury Secretary Stephen Mnuchin confirmed the plans on Monday at the start of a week that featured mixed signals as to whether the two countries were getting closer to a resolution or further apart.

Jobs ahead: The week’s most closely watched economic report is likely to be Friday’s labor market release. The pace of job growth has recently slowed, with August’s gain of 130,000 leaving the year-to-date monthly jobs growth average at 158,000, down from 2018’s 223,000.

Sluggish inflation: The latest reading on U.S. inflation showed price gains continue to be small, despite potentially inflationary pressures from steadily rising wages. The U.S. Federal Reserve’s preferred gauge for measuring inflation rose by a seasonally adjusted 0.03% in August relative to the prior month—the smallest amount since January.