Dow up 100 points as crucial midterm elections come into focus

U.S. stocks continued to edge higher midday Tuesday, as traders awaited the results of midterm elections that could set the political tone on Wall Street for at least the next two years.

How are the benchmarks performing?

Midterm elections, which are expected to see Democrats take control of the House and Republicans maintain a grip on the Senate, are under way and the results could have implications for President Donald Trump’s legislative agenda.

In the final pre-election Wall Street Journal/NBC News poll released Sunday, Democrats held a 7 percentage-point lead on the question of which party should control the next Congress.
The most likely outcome of the elections is political gridlock, which has historically been a positive for investors, but may forestall expectations for infrastructure investments and further deregulation that might help lift shares of financial firms.

It’s good news, even though Americans are on edge about politics

Are you prepared for Tuesday? It’s going to be a crucial day for the stock market.

If the polls are correct, President Trump and Republicans are in big trouble. There’s an 85% chance Democrats will seize control of the House of Representatives from Republicans, according to statistical analysis firm FiveThirtyEight.

This is causing big-time anxiety for investors who’ve enjoyed the 28% stock market rally since Trump took office. No matter what you think of Trump, his reign as president has been great for stocks. But as the election has drawn closer, the market has fallen apart.

The S&P 500 Index SPX, +0.63% closed out October for a 7% monthly drop, nearly its worst month since the financial crisis. So what could happen this month — and the months ahead?

So let’s steer clear of opinion and emotion. Instead, I want to focus solely on the facts that are relevant to you as an investor. As you’ll see, you don’t need to waste even one second worrying about which party will win on Tuesday. I was surprised by what we found.

Since 1946, stocks have risen an average of 17% in the year after a midterm. And if you measure from the yearly midterm lows, the results are even better. From their lows, stocks jumped an average of 32% over the next 12 months. For perspective, that’s more than double the average performance for stocks in all years. We’re also entering the third year of a presidential term, which is historically the strongest year for stocks.

Take a look at this chart. You can see that the performance of stocks in the third year of a presidential term beats all other years by a long shot: 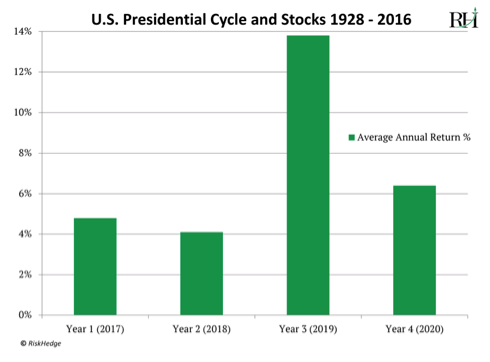 Bouncing back: Stocks regained positive momentum after posting steep declines in two of the three previous weeks. The S&P 500 and the Dow both added more than 2%, returning to positive territory year to date just a week after going briefly negative on a price return basis.

Bruising October: A rally over the final two days of the month took only a little of the edge off the U.S. stock market’s worst October performance since 2008. The 6.9% decline in the S&P 500 was the biggest drop for any month in seven years, leaving the index with only a tiny gain over the first ten months of the year.

Bouncing back: Stocks regained positive momentum after posting steep declines in two of the three previous weeks. The S&P 500 and the Dow both added more than 2%, returning to positive territory year to date just a week after going briefly negative on a price return basis.