Gross domestic product rose 2.6% in the third quarter versus the estimate of 2.3%.

*A narrowing trade deficit and increases in consumer spending and government outlays boosted the number.

*A sharp pullback in housing subtracted from the number, part of a broader decline in private investment.

*Consumer spending decelerated, increasing at just a 1.4% pace in the quarter, down from 2% in Q2.

The U.S. economy posted its first period of positive growth for 2022 in the third quarter, at least temporarily easing recession fears, the Bureau of Economic Analysis reported Thursday.

GDP, a sum of all the goods and services produced from July through September, increased at a 2.6% annualized pace for the period, according to the advance estimate. That was above against the Dow Jones forecast for 2.3%.

That reading follows consecutive negative quarters to start the year, meeting a commonly accepted definition of recession, though the National Bureau of Economic Research is generally considered the arbiter of downturns and expansions. 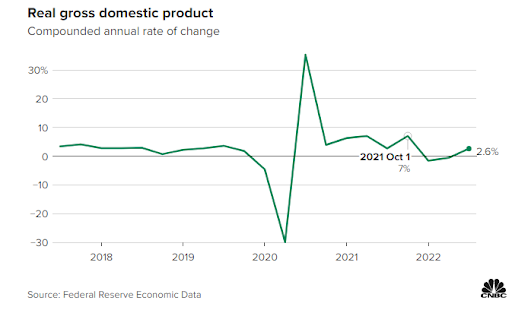 The growth came in large part due to a narrowing trade deficit, which economists expected and consider to be a one-off occurrence that won’t be repeated in future quarters.

GDP gains also came from increases in consumer spending, nonresidential fixed investment and government spending. The report reflected an ongoing shift to services spending over goods, with spending on the former increasing 2.8% while goods spending dropped 1.2%.

“Overall, while the 2.6% rebound in the third quarter more than reversed the decline in the first half of the year, we don’t expect this strength to be sustained,” wrote Paul Ashworth, chief North America economist at Capital Economics. “Exports will soon fade and domestic demand is getting crushed under the weight of higher interest rates. We expect the economy to enter a mild recession in the first half of next year.”

Fed approves 0.75-point hike to take rates to highest since 2008 and hints at change in policy ahead

The Federal Reserve on Wednesday approved a fourth consecutive three-quarter point interest rate increase and signaled a potential change in how it will approach monetary policy to bring down inflation.

In a well-telegraphed move that markets had been expecting for weeks, the central bank raised its short-term borrowing rate by 0.75 percentage point to a target range of 3.75%-4%, the highest level since January 2008.

The move continued the most aggressive pace of monetary policy tightening since the early 1980s, the last time inflation ran this high.

Along with anticipating the rate hike, markets also had been looking for language indicating that this could be the last 0.75-point, or 75 basis point, move.

The new statement hinted at that policy change, saying when determining future hikes, the Fed “will take into account the cumulative tightening of monetary policy, the lags with which monetary policy affects economic activity and inflation, and economic and financial developments.”

Economists are hoping this is the much talked about “step-down” in policy that could see a rate increase of half a point at the December meeting and then a few smaller hikes in 2023.

Positive momentum
The S&P 500 and the NASDAQ posted solid gains for the second week in a row, and the Dow notched its fourth consecutive positive result, surging nearly 6% to outperform its peers by wide margins. Mixed earnings results from some major technology companies weighed on the NASDAQ’s result.

Housing trouble
In the wake of the recent surge in mortgage rates, a key measure of housing market sales activity fell far more than expected. The National Association of Realtors on Friday reported a 10.2% decline in pending home sales compared with the previous month. Economists had expected a decline of around 4.0% on average.