Consumer inflation posts biggest jump in nine months on higher cost of gas, rent, used cars, CPI shows
The numbers: Americans paid more in October for gas, rent and used vehicles, triggering the biggest increase in consumer inflation in nine months.
The consumer price index climbed 0.3% in October to mark the biggest advance since January, the government said Wednesday. It also matched the forecast of economists polled by MarketWatch.
The increase in the cost of living over the past 12 months rose as well — to 2.5% from 2.3%. The rate of inflation is still below a six-year high of 2.9% set three months ago, however. 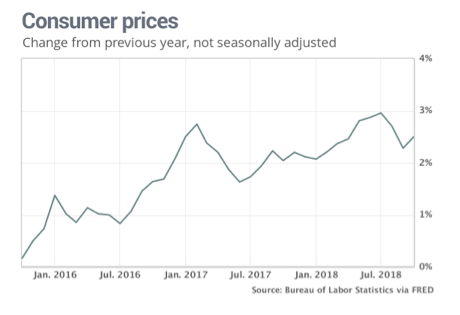 Another measure that strips out food and energy edged up 0.2% last month.
Yet the yearly increase in the so-called core rate, a figure closely watched by economists, dipped to 2.1% from 2.2%. That’s the smallest increase since April.

What happened: Higher gas prices accounted for more than one-third of the increase in consumer prices last month.
The good news is, the falling price of oil CLZ8, +1.76% is likely to result in lower prices and less pressure on inflation in the next few months.
Still, the cost of rent, used cars and trucks, medical care, home furnishings and car insurance also increased. These are major household expenses.
Prices for new vehicles and communications declined.
After adjusting for inflation, hourly wages slipped 0.1% in October. They are up a mild 0.7% in the past year.

JP Morgan Thought of the week:
The US midterm elections resulted in the Republicans increasing their majority in the Senate, but losing control of the House of Representatives to the Democrats. The result likely ends the prospect of further significant tax cuts being announced. The Democrats will probably have little interest in passing another round of tax cuts that the President would take credit for, in the run up to the Presidential election in 2020. The current fiscal stimulus has clearly added to growth, but the political gridlock now increases the odds of slower US economic growth once the current fiscal stimulus starts to fade, in the second half of 2019 and beyond.

November’s strong start: The S&P 500 and the Dow both gained more than 2% for the second week in a row, recovering much of the ground lost in October’s sharp decline. However, technology stocks continued to lag the broader market, and the NASDAQ trailed other major indexes by a wide margin.

Election catalyst: As has often been the case historically with midterms, stocks rallied once Election Day had passed. Tuesday’s vote creates a divided government, as Democrats will regain control of the House in January while Republicans will have an expanded Senate majority.

Vote of confidence: In the wake of Tuesday’s election, the Dow surged nearly 550 points on Wednesday in a broad rally that sent 29 of the index’s 30 stocks higher. The index rose to its highest level since October 9—a sharp turnaround after stocks came close to falling into correction territory just two weeks earlier.