Comments from Federal Reserve Chairman Jerome Powell and St. Louis Fed President James Bullard on Tuesday dampened hopes by some investors that the central bank would deliver a half-point interest-rate cut in July.

In comments at the Council of Foreign Relations, Powell stuck close to comments he made at his press conference last week, saying that while there is greater uncertainty about trade and worries about the global economy, officials don’t know how long this may last or how serious the drag might be.

“The question my colleagues and I are grappling with is whether these uncertainties will continue to weigh on the outlook and thus call for additional policy accommodation,” Powell said in brief remarks ahead of a moderated discussion at the Council on Foreign Relations in New York.

St. Louis Fed President James Bullard, who dissented from the Fed decision to hold rates steady last week in favor of a quarter-point rate cut, repeated in an interview Tuesday that he thought a quarter-point cut would be a wise “insurance” move. But Bullard said he didn’t see the need for a half-point cut.

“I think 50 basis points would be overdone,” Bullard said on Bloomberg Television.

Powell said that “many FOMC participants” judge that the case for somewhat more-accommodative policy has strengthened.

Only 10 of the 17 Fed participants are voters. The committee voted 9-1 to hold rates steady last week.

Since that meeting, Bullard and two other Fed officials have publicly made the case for easier policy, while Dallas Fed President Robert Kaplan took a wait-and-see approach similar to Powell’s.
Stocks sank after Powell and Bullard spoke, with the Dow Jones Industrial Average DJIA, -0.67% finishing down close to 180 points.

Krishna Guha, a former Fed staffer and now vice chairman of Evercore ISI, said he thought investors were worried that “the Fed may not be as far ahead of the curve as it thinks, with incoming data suggesting that economic weakness may be spreading broader and deeper that the Fed has yet recognized.”

Powell said Fed officials are mindful that monetary policy “should not overreact to any individual data point or short-term swing in sentiment.”

“Doing so would risk adding more uncertainty to the outlook,” he added.

At the same time, Powell said he agreed with the “general principle” that it is better for central banks to act preemptively and not let a downturn “gather steam.”

“The thought being, an ounce of prevention is worth a pound of cure,” he said.

Fed outlook: The U.S. Federal Reserve Board kept interest rates unchanged, but comments from Fed Chairman Jerome Powell lifted market expectations that a potential rate cut could come as soon as July 31, when the Fed concludes its next policy meeting. Powell said, “The case for somewhat more accommodative policy has strengthened.”

Talking again: U.S. stock indexes jumped more than 1% on Tuesday after the leaders of the United States and China agreed to meet at the G20 global economic summit scheduled for June 28–29 in Japan. Presidents Donald Trump and Xi Jinping planned to make a fresh attempt to reverse the recent escalation in the trade dispute between the world’s two largest economies.

Return to record territory: U.S. stock indexes climbed more than 2%, with the S&P 500 eclipsing a record high that it had set in late April and the Dow just shy of its historic peak. The latest weekly results extended the market’s strong run in June, which has seen stocks post a V-shaped recovery in the wake of May’s steep decline. 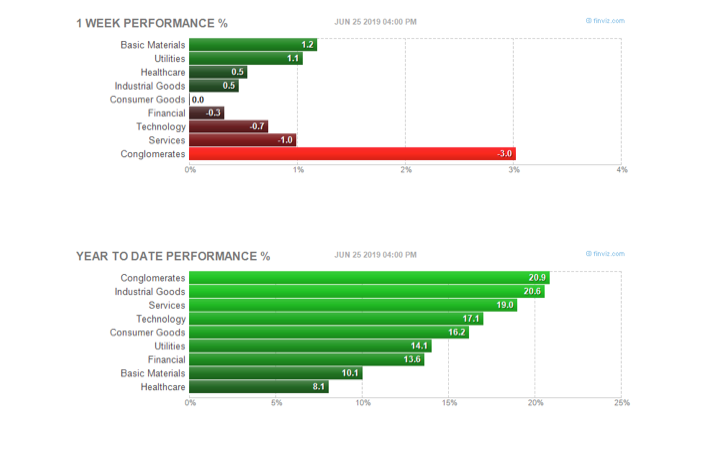